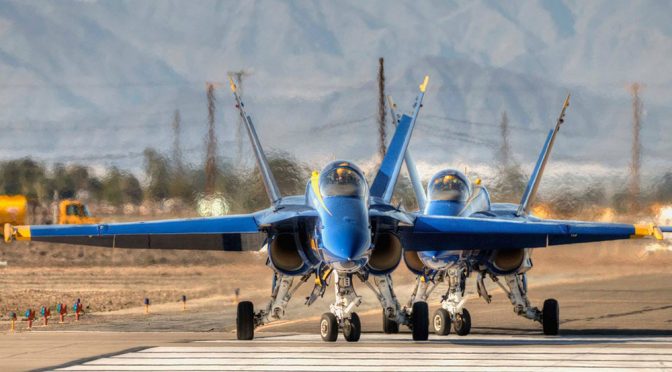 The worlds most famous jet team, The Blue Angels, will headline the 2017 China Lake Air Show.  Several of the team’s aviators met with officials during a visit to China Lake Naval Air Weapons Station on January 9th, in advance of the upcoming air show.  The Blue Angels will be the featured performers at the air show, set to take place on March 18th and 19th.  The much anticipated event will be the first air show at the China Lake base in 23 years.

The Blue Angels are known for their precision formation flying and are a crowd favorite throughout the world.  At the show, they will be flying their six, distinctive, blue and gold FA-18 Hornets.

Details about other show performers, static displays and additional features are being announced soon.  Event general admission and parking are free.  Also, there are a limited amount of premium seating options available, including box seats and a Flight Line Club where spectators enjoy the most exclusive seating, private amenities, and the best view of the show.  High-resolution images and b-roll of the Blue Angels are available from the Blue Angels website.