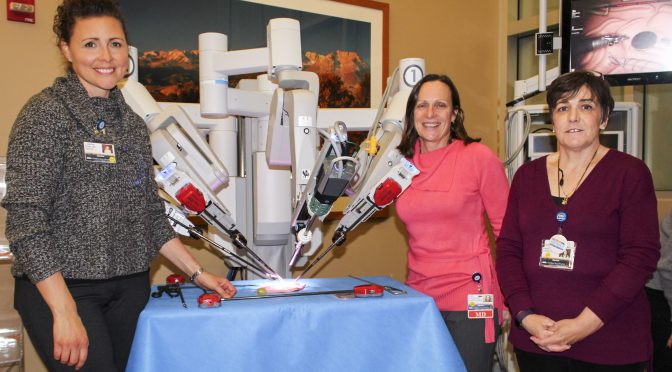 Robot-assisted surgery is now available at Northern Inyo Hospital according to a press release from Barbara Laughon at NIHD, local healthcare leaders got hands-on access to Northern Inyo Healthcare District’s new robot-assisted surgical system last week and put it through its paces. When all was said and done, the new da Vinci system had won local critical acclaim.

The da Vinci system translates a surgeon’s hand movements into smaller, precise movements of tiny instruments inside a patient’s body. One of the instruments is a thin tube with a tiny camera and light at the end. The camera sends high-definition, three-dimensional images to a video monitor in the operating room to guide the surgeons during surgery.

The surgeon, who remains in the surgery room with the patient and surgical nurses, is in control of the system at all times. If the surgeon makes a sudden jerk of her hand due to a sneeze or sudden tremor, the system freezes the controls and only releases them when the surgeon is ready.

To date, there have been 15 robot-assisted surgeries completed at NIHD.

Those in attendance were put in the surgeon’s seat and allowed to “operate.” In this demonstration operating meant using the small instruments to peel and re-attach the skin of a grape, stitch up a practice mat and pick up small coins. They ran the system through its paces, testing the system’s safety mechanisms by faking sneezes and shaking their hands.

For NIHD’s Chief Executive Officer, Kevin S. Flanigan, MD MBA, the addition of the system opens the door for recruitment of a specific specialist. “This addition does open the door for us to try and bring in a Urologist, a much-needed specialty here,” Dr. Flanigan said. “Before we had the da Vinci system we could not get one candidate to tour our community. Last week, we had two candidates on campus.”

Stay tuned for more information regarding recruitment at NIHD.