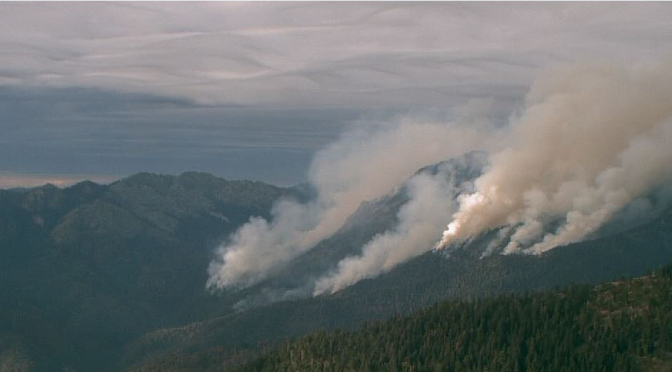 Residents of Lone Pine are still dealing with smoke from fires in the Sierra over the weekend. According to the US Forest Service, the Hidden Fire, burning along the eastside of Mountain Home Demonstration State Forest, and inside the Golden Trout Wilderness, Sequoia National Forest grew by over 1,500 acres yesterday. The current fire size is approximately 2,739 acres. The fire began on October 29th due to lightning.

Firefighters conducted aerial ignition in the upper end of the Burro Creek drainage yesterday. They monitored previously ignited areas in the Silver Creek and Tule River drainages to ensure they backed down the slope evenly. Burning conditions and smoke dispersal remained favorable throughout the day yesterday, ahead of the approaching storm system.

Depending upon the amount of precipitation the fire area received last night and this morning, aerial ignitions may continue to help establish a low intensity backing fire in the Burro Sequoia Grove. Overall, a major reduction in smoke production is expected over the next several days. Up to ¼ inch of precipitation was forecast over the fire area last night. There are currently 85 personal assigned to the fire.

The Forest Service and CAL FIRE are working together to confine and contain the Hidden Fire to a designated area across both jurisdictions while ensuring firefighter and public safety.

Fire officials are working daily with air quality specialists to monitor particulate matter from smoke and share that information with the public, as well as advise them of precautions they can take to reduce their exposure.