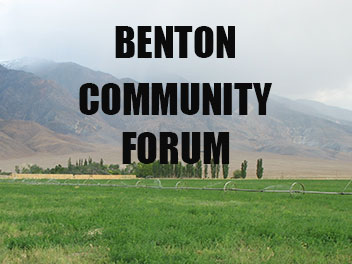 On Monday night at the Benton Community Forum, it was proposed by Superintendent Don Clark that next year, Benton’s Edna Beaman Elementary School be restructured from a K-5 School to a K-3 School. The proposal was met with concerns within the community. As the proposal will eliminate one teacher and force the remaining teacher to take on a larger class consisting of the schools entire K through 3rd grade student body. At the top of the list of concerns was the issue of 9 and 10 year old Benton students being required to board a bus to Chalfant at 6:30 in the morning and then transfer to another bus on their way to school in Bishop. The same trip would be required on the way home, arriving back in Benton at 4:30 p.m. Other concerns for the citizens of Benton would be opinions that property values might take a hit due to a lack of educational facilities. It was insisted by Dr.Clark that the proposal  was still in the talk phase and needs to be voted on during a meeting next Wednesday at Edna Beaman at 6 p.m. They will further discuss the proposal before the entire Board. The actual vote is set to take place at the November Board Meeting for which the date will be set later.