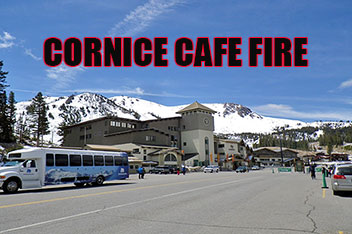 According to Thom Heller, the Fire Marshall/Division Chief for Mammoth Lakes Fire Department, shortly after midnight on October 13th, the Mammoth Lakes Police Departments, and Mono County Paramedics were dispatched to an alarm of water flowing from the automatic fire suppression system on the 3rd floor of the Main Lodge at Mammoth Mountain Ski Lodge. Shortly before arriving, Mono County Dispatch relayed  a message from MMSA Security that there was a moderate amount of smoke in the Cornice Cafe and that the fire sprinkler system had been activated.

When crews arrived, the smoke layer was three feet down from the ceiling and there was water spraying from a single sprinkler head in the vicinity of several display cases, Further investigation revealed that a fire from an electrical component within a display case had developed sufficient heat to activate the fire sprinkler head and the fire was contained to the display case. There was minimal damage to the wall behind the case and to the electrical outlet that served the display case. Repairs will be made and the lodge will be open for the start of the ski season without delay. Luckily, there were no injuries due to this incident.