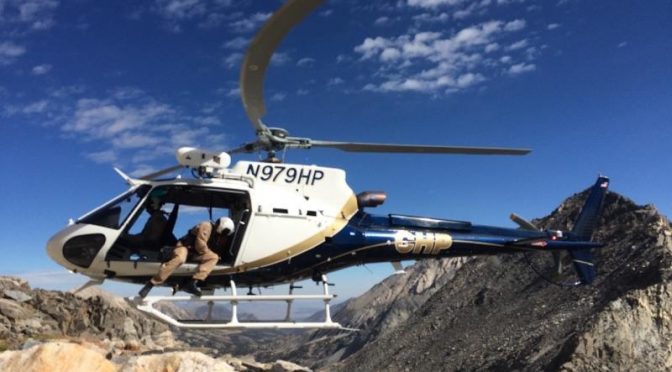 According to Carma Roper, Inyo County Sheriff’s Office was contacted the evening of September 18th regarding a deceased fall victim near Bear Creek Spire. The reporting party, and climbing partner, indicated that the two-person team had camped at Dade Lake and set out the morning of the 18th to ascend Bear Creek Spire. As the pair was traversing the route the victim, a 26 year old woman from the San Francisco Bay Area, lost her footing and fell between 800-1000 feet. The reporting party descended down the steep chute but discovered the victim to be deceased. With the assistance of two hikers, the reporting party was guided back to the Mosquito Flat trailhead where a 911 call was able to be placed.
Inyo County Sheriff’s Office requested CHP helicopter H-70 out of Paso Robles to assist in the recovery operation on September 19th. H-70 attempted to locate the victim, but the high winds required aerial support to postpone the recovery until the following morning.
The morning of September 20th, the victim’s body was located and transported to the Bishop airport where they were met by the Inyo County Coroner.
Assisting in this recovery operation were Inyo Search and Rescue, Inyo Sheriff, H-70 out of Paso Robles, and CHP flight members from H-80 out of Apple Valley.