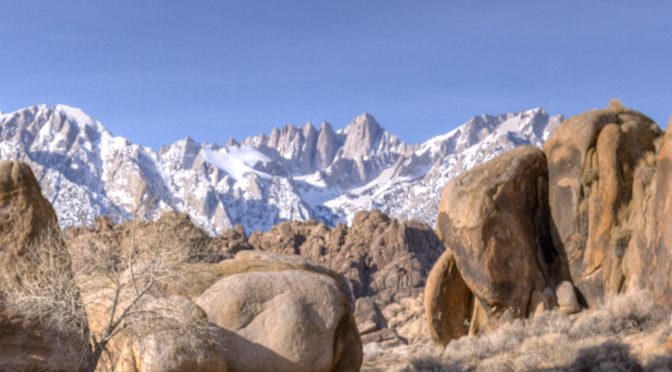 After a five day search that involved nearly 100 people, 2 search dogs, and 4 helicopters, the body of missing hiker John Lee was spotted last Sunday afternoon by a search helicopter in Sequoia National Park.  The 68 year old hiker from Mentone California was discovered at the base of the SouthWest slope of Mt. Whitney at approximately 12,500 feet in elevation.
Lee and several of his friends began the hike on Monday July 18th at 4am and had planned to return to their vehicle at the trail head by days end.  The group had intended to follow the Mountaineers Route, but after becoming concerned for their safety they decided to stop and sleep near the top of the Whitney Russell pass about a half mile from the Mount Whitney summit.
on Tuesday Morning three members of the hiking party stayed behind while Lee continued on.  Later His companions saw his backpack “hanging” on a granite ledge.  After waiting for several hours, his group believed they would meet Lee at the car and descended the mountain with the assistance of several experienced hikers that they met along the way.  They returned to the trailhead around 10pm on Tuesday to no sign of their missing companion.
The search began on Wednesday and went on until Sunday when the body of the missing hiker was discovered.
Lee’s remains have been transferred to the Tulare County Coroner’s Office.  The cause of death is under investigation.