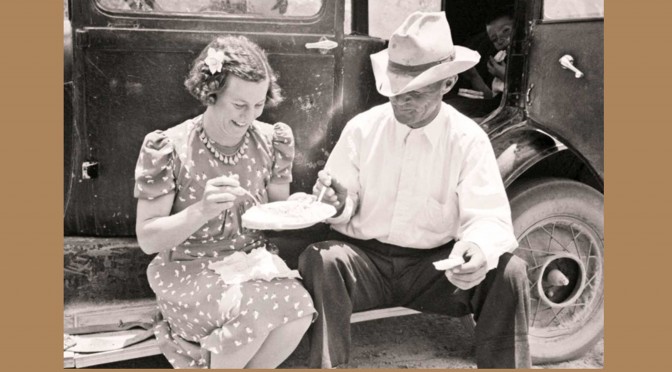 While not everyone enjoys celebrating historic milestones, pretty much everyone enjoys homemade pie. And though there might be a slim number of pie haters out there, it’s a pretty good bet they like ice cream.

Inyo County is covering all those bases on Tuesday, March 22, when the county marks its 150th birthday with an official ceremony on the steps of the Historic Courthouse in Independence, starting at 10 a.m., followed by a Community Pie and Ice Cream Social.

Mementos of the milestone will include a souvenir program, a tee shirt emblazoned with the Inyo County Sesquicentennial Logo, and a recipe book that serves up morsels of Inyo County history and about 50 tried-and-true pie recipes from local bakers.

Everyone in Inyo County is invited to enjoy the ceremony on the courthouse steps, which will include some “pomp and circumstance,” with an Inyo County twist. For example, a local politician will sing the national anthem, and the music for the ceremony will be provided by the volunteer musicians of the Lone Pine Pep Band. There will also be proclamations, entertaining and educational featured speakers, and comments from dignitaries.

The reward for “enjoying” that ceremony will be immediate. As soon as the group sing-along of “America The Beautiful” wraps up, and after everyone gathers for a crowd “selfie” on the courthouse steps, the assembled Inyoites will stream to the Independence American Legion Hall to consume slices of pie, scoops of ice cream and beverages.

Since not even the most committed pie-lovers could sample all the pies on hand at the event, pie afficeinadoes will get the next best thing: dozens of pie recipes. The Inyo County Sesquicentennial Committee solicited pie recipes from many of the county’s bakers. Those recipes, along with a dollop of advice, were gently stirred until they were well-mixed. Next, a heaping dose of local history was folded in and the finished product is “Heritage and Humble Pie: Inyo 150 Sesquicentennial Celebration Keepsake.”

The Keepsake will be available for free to those attending the event. The 120-page pie book features all manner of regular pies, and more than a few specialty pies that will pique the curiosity of everyone with a working oven.

Dangerous treks through Death Valley are recounted, and comfort is found in Furnace Creek Inn Date Nut Bread, a bit hit since about 1927.

While pondering the early settlements and towns of Inyo County and the arrival of the US Army, readers can also consider a Maple Syrup Pie, submitted by Judy Peek of Lone Pine, who got the family recipe from her mother, Dee Collins.

The arrival of miners and mining schemes balanced with the expanding population of farmers, families and business folks that eventually lead to the formation of Inyo County in 1866. Forming an Angel Pie, as directed by Sarah Sheehan, of Bishop, is much easier, despite the pie’s exotic roots in Colonial India. Exotic brandy enhances the Eggnog Custard Pie, from Shirley Ellsworth of Bishop.

The start of the 20th century brought the “Water Seekers” from Los Angeles, followed by the Los Angeles Aqueduct, which gave Inyo County a unique combination of competing interests, governments and conflicts which endures to this day.

Another, more enjoyable combination comes in the form of a Pumpkin Pie Cake, shared by Sharyl Stephens, of Fort Independence, from a recipe she got from her relative, Phyllis Hunter.

Paying homage to the county’s ranching heritage is a Dutch oven strawberry cobbler, which Linda Arcularius, of Bishop, has been cooking and feeding to local cowboys and cowgirls for years during spring branding season.

Also intriguing is the rather spiritual exercise that results in Methodist Pie, a heaven-sent recipe from Karen Scott, of Bishop.

Offering a bit more sustenance is the Easiest Ever Chicken Pot Pie, from Linda Hubbs, of Lone Pine.

Offering sustenance for those with a sweet tooth is an Easy Ice Cream Pie, submitted by Jennifer Duncan, of Independence.

That sampling menu of pies is just a taste of the delights awaiting the county’s ambitious cooks and bakers between the covers of “Heritage and Humble Pie: Inyo 150 Sesquicentennial Celebration Keepsake.”

For more information about the Sesquicentennial Celebration and the Heritage and Humble Pie Keepsake, contact the Eastern California Museum, 760-878-0258.