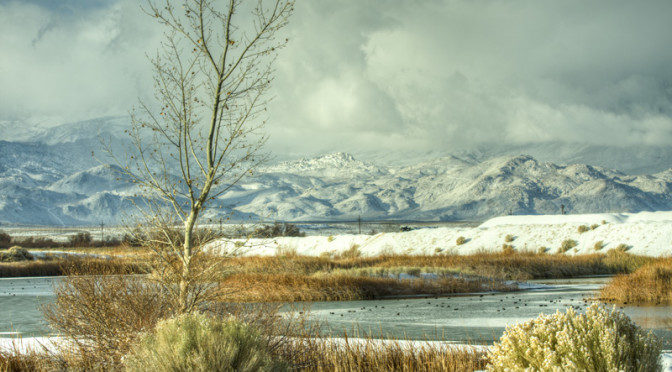 The public is invited to join the tour  Wednesday February 10th at 9 am.  Meet in Bishop at the corner of Wye Road and Spruce Road—Directly behind Kmart

The Inyo County Water Commission invites the public to participate in a field trip to the Five Bridges Impact Area located three miles north of Bishop. In the summer of 1988, approximately 300 acres of native vegetation were lost when nearby LADWP wells de-watered the area and caused groundwater to retreat from below the rooting zone. The area is an environmental Mitigation Project identified in the 1991 Long Term Water Agreement between Inyo County and LADWP.

LADWP has managed the revegetation of this area, with input from the County since the fall of 1988. The project has as its goal reestablishing native meadow similar to those that exist nearby outside the affected area. This has not been easy, and based on measures of vegetation cover and composition; the project has only fully met desired conditions six times in the past 26 years.

The tour will include an overlook of the Five Bridges Impact Area and two short walks into the project site.

Also discussed will be the proposal by LADWP to operate the two wells that led to the loss of vegetation. These wells, designated 385R and 386R have been modified to draw water from the deep aquifer at a lower rate. LADWP considers these new wells. This proposal is currently under discussion by the County and LADWP.

The Inyo County Water Commission is an advisory panel to the Inyo County Board of Supervisors. One of its principal responsibilities is to conduct meetings to inform and educate the public about, and to solicit public opinion on, all issues, decisions, projects, programs and activities arising out of agreements and stipulations between the LADWP and Inyo County.