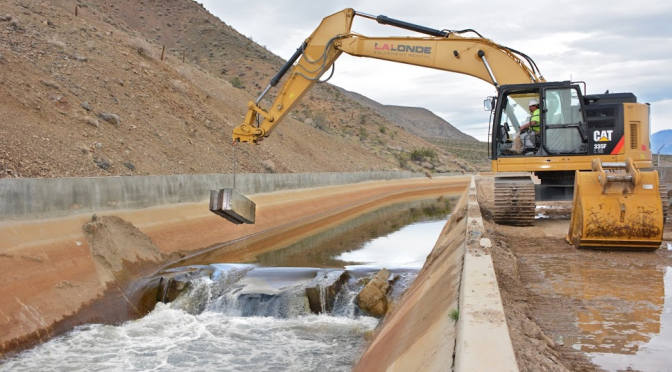 Statement from the Los Angeles Department of Water and Power:

Bishop, CA – After meeting environmental demands in the Eastern Sierra for the irrigation season, the Los Angeles Department of Water and Power (LADWP) removed the temporary dam in the Los Angeles Aqueduct, unblocking the system and allowing exportation of approximately 22,000 acre feet (AF) of water gathered from the Inyo/Mono Basin this runoff year to flow south to Los Angeles.

“While our past actions may have contributed to negative impacts in the Eastern Sierra region, our current mitigation efforts are working to not only restore the land, but also our relationship to the local community,” LADWP General Manager Marcie Edwards said.

“On a normal year, nearly half of all Los Angeles Aqueduct water from the Inyo/Mono Basin stays in the Owens Valley for Owens Lake, environmental mitigation efforts, irrigation, and other uses,” LADWP Los Angeles Aqueduct Manager Jim Yannotta said. “This year, with the snow pack at just four percent of normal, there isn’t enough water to fulfill the needs of both the Owens Valley and Los Angeles. The City of Los Angeles received drastic water reductions, demonstrating LADWP’s strength of commitment to the Eastern Sierra community.”

The total Eastern Sierra water supply on an average year is approximately 541,000 AF. Of this amount, approximately 230,000 AF is typically exported from the Eastern Sierra region to Los Angeles. The rest, nearly 50 percent, is kept in the Owens Valley for uses including environmental mitigation, recreation, habitat enhancement, irrigation and dust mitigation on the Owens Lake, among others. This year, with the temporary aqueduct dam in place, Angelenos will receive just 10 percent of typical exports.

With the residents of Los Angeles receiving a drastic reduction of water from the Eastern Sierra, LADWP had to increase purchased imported water from the Metropolitan Water District and the State Water Project. In addition, Los Angeles increased conservation levels above their already state-leading efforts, meeting stringent goals mandated by Governor Brown and Mayor Garcetti. As a result of this conservation Los Angeles has the lowest water use per capita of all major U.S. cities with a population of over 1 million.

In addition to conservation, LADWP is hard at work shoring up local water resources by increasing stormwater capture efforts and recycled water programs. Furthermore, the Department is cleaning up the San Fernando Groundwater Basin where man-made pollution caused by industrial activities beginning in the 1940s severely impaired the quality of the groundwater, forcing the closure of nearly half of LADWP’s production wells in the area. Staff is working to remove contamination from the groundwater and restore use of the aquifer which once provided over 28 billion gallons per year – nearly two months of the City’s water supply.

With these increases in local water supplies and conservation efforts, Los Angeles is on track to cut imported water purchases from the Sacramento Bay Delta and Colorado River in half by 2025, and an Executive Directive from Mayor Garcetti last year has cemented these commitments.