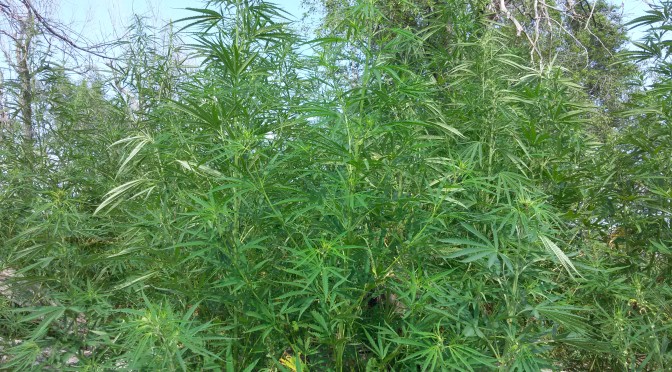 Multi-Agency Response Leads to the Discovery and Eradication of More than 6,000 Marijuana Plants in Lincoln County, Nevada

On Thursday, August 27, 2015, personnel from the United States Bureau of Land Management (BLM), the Nevada Department of Public Safety-Investigation Division (DPS-ID), the Nevada National Guard, and the Lincoln County Sheriff’s Office conducted an operation in which they eradicated a large illicit marijuana grow located in the remote mountains of central Lincoln County, Nevada.  Law enforcement personnel conducted the eradication during the early morning hours, and as a result of their efforts, they recovered approximately 6,476 plants which is estimated to have a street value of $17 million.  Based on evidence collected, it appears that individuals had operated this site for several years and that it was capable of producing large quantities of illegal marijuana intended for sales and distribution.

In addition to the marijuana plants, law enforcement personnel recovered and removed nearly two miles of black irrigation piping, along with various chemicals, used during the growing process.  Law enforcement personnel also had to rely upon the assistance of a CH-47 Chinook Helicopter from the Nevada National Guard to assist them with the removal of several hundreds of pounds of trash which the growers had left behind.  While additional evidence was collected, law enforcement did not encounter or arrest any individuals during the operation.

Despite the decriminalization of marijuana in many states, outdoor marijuana grows such as the one which law enforcement personnel encountered in Lincoln County continue to remain illegal and pose a significant problem to public safety as many of the growers carry firearms and can become confrontational with anyone they encounter. Additionally, many of these sites occur on public lands, increasing the potential for a confrontation between members of the public and the growers.

Another concern for law enforcement is the damaging effects which these sites have upon the environment.   Growers frequently utilize highly toxic pesticides and chemicals to ensure a larger harvest and to keep animals, rodents, and insects away from the marijuana plants. These harmful chemicals make their way into the ecosystem and contaminate the soil, water table, and surrounding plant and animal life.  Often times, these chemicals and pesticides are obtained from outside of the United States and are banned due to their harmful effects.

The Nevada Department of Public Safety, Investigation Division reminds members of the public to be cautious should they come across items such as plastic irrigation piping, garbage, tents and camps located in remote areas of public lands.  Should anyone come across what they believe to be an illegal marijuana grow site, the Nevada Department of Public Safety, Investigation Division recommends that they leave the area immediately and report it at (775)-687-0450, or online at www.id.dps.nv.gov  (click on See Something, Say Something). Anyone who reports can remain anonymous.