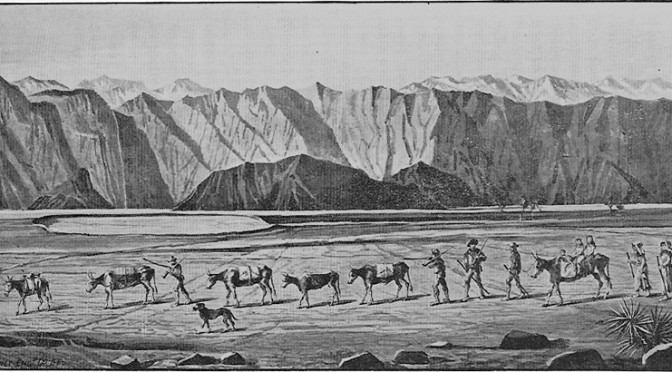 A History filled weekend starts Friday at the Winnedumah Hotel

The Eastern California Museum is pleased to announce a community outreach program for residents and visitors alike, through a series of interpretive talks, guided tours and educational programs beginning Friday, August 14.

The Museum will kick off their exciting program with a history talk at the historic and newly re-opened Winnedumah Hotel in Independence on Friday, August 14 at 7:00 p.m. The 45 minute program is titled “Into the Jaws of Hell” and is the true and spell binding story of how Inyo County’s Death Valley got its name. It is a story of bravery and determination taken to their highest level. The program will be held just off the lobby of the Winnedumah and will begin at 7:00 p.m.

On Saturday morning at 8 a.m., everyone is invited to meet at Dehy Park, located on the north end of Independence to join David Woodruff on a one hour walking tour of Independence’s Historic District. Independence features several prominent and historical buildings that have played an important role in the development and history of the small town as well as Inyo County. The interpretive walk takes about an hour and covers about three quarters of a mile. There is plenty of parking at Dehy Park.

Then on Sunday August 16 at 2:00 p.m., author, scholar and basket weaver Justin Farmer will be conducting an afternoon of shared traditions and stories. Farmer is a knowledgeable and practiced basket maker and has conducted extensive research into cradle-boards and cradle baskets of California and Western Great Basin’s Native American cultures. The program will be at the Eastern California Museum located at 135 N. Grant Street in Independence, just three blocks west of the Inyo County Courthouse.

All of these listed events are free and provided with support from the non-profit Friends of the Eastern California Museum. Additional events are planned for the following weeks and on through September. Upcoming events will include an interpretive tour of Manzanar Historic Site, a program and slide show by noted Owens Valley rock art scholar Courtney Smith and a tour of the mining town of Cerro Gordo, road conditions permitting. Several additional events are planned as well.