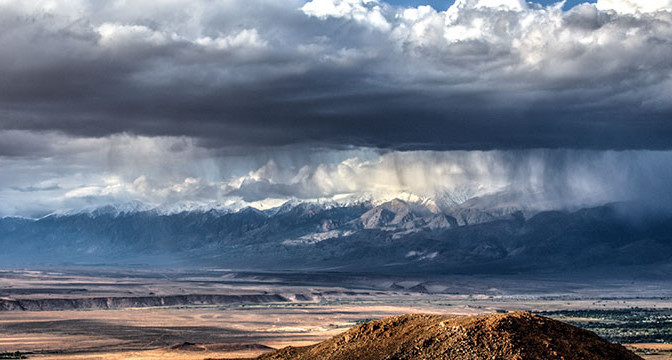 “We just made peace with the Owens Valley,” Mayor Garcetti declared in a recent interview with MSNBC reporter Chris Hayes. He went on to state that he wishes to avoid “turning city folk against rural folk,” that Los Angeles has “plenty of water,” and that using water to mitigate dust on the Owens Lake is “stupid.”

We wish it were so. But however much the City’s Mayor wants it, the Los Angeles Department of Water and Power (LADWP) continues to wage intense battles to supply a thirsty city.

Instead of a historic truce, we have seen politics as usual. In making his incorrect statements, Mayor Garcetti unwittingly provides yet another example of the problems inherent in Los Angeles’s colonial rule of Owens Valley. Political leaders in Los Angeles rely entirely on the Los Angeles Department of Water and Power for information. Owens Valley residents cannot vote in LA elections and have no elected representatives to provide accurate information to the Mayor and to advocate for our interests.

Without such a voice, peace remains elusive. On April 27, 2015, LADWP announced it would cut off all water to the Valley’s ranchers and farmers. With only three days notice, LADWP not only threatened livelihoods, but also the Valley’s economy, native animals and plants, and its dwindling groundwater supply – all of which depend on the water that flows onto the fields of farmers and ranchers.

The Inyo-LA Long Term Water Agreement – the settlement agreement to which LA is legally bound – does not allow LADWP to unilaterally cut off water. Yet only a threat by Inyo County to seek an immediate injunction forced LADWP to back down, proving, yet again, that it will continue to “turn city folk against rural folk.”

Not only has peace not been made, LADWP is defying the Mayor’s widely publicized goals of “sustainability” and “reducing dependence on imported water.” The Mayor referred to LADWP’s plans to take water that would otherwise restore life in portions of Owens Lake, and send it down the aqueduct instead. If implemented, this plan will increase Los Angeles’s dependence on Owens Valley water instead of reducing it. Mayor Garcetti spoke of sharing Owens Lake water with the Owens Valley, but we have yet to hear that from LADWP. The new wells LADWP plans to drill will also increase Los Angeles’s dependency. While the Mayor calls for sustainability, it is exploitation as usual in the Owens Valley.

Despite claims that LA has “plenty of water,” LADWP continues to dig out seeps and springs, and to pump groundwater that is not being recharged. Meanwhile, vegetation in the Valley is drying up; fish and wildlife habitat is shrinking; farmers and ranchers must cut back crops and cattle; and dust still spews from the Owens Lake.

Some water on the lake bed is essential, and far from “stupid.” Owens Lake was the largest source of particulate pollution in North America, producing lung-scarring dust laced with toxic heavy metals. While there has been significant reduction in the amount of dust from Owens Lake, there are still too many days the dust levels exceed federal and state standards. Water not only keeps the dust down; it creates habitat for birds and other animals, and it covers – without destroying – historical artifacts and markers.

Given all this, we must question whether the “water wars” have indeed reached their end. We appreciate the Mayor’s optimism, and support for water conservation more generally, but achieving an effective truce will require more than good wishes. It requires action – not only on the part of City and County leaders, but by LADWP. For a City with “plenty of water,” and leaders truly hoping to bridge the divide between “city folk and rural folk,” such action should not be too hard.

The Owens Valley Committee is a non-profit (501c3) organization seeking just and sustainable management of Owens Valley land and water resources. We envision a valley in which existing open space is protected, historic land uses sustained, and depleted groundwater reserves and surface water flows restored as Los Angeles phases out its dependence on Owens Valley water.