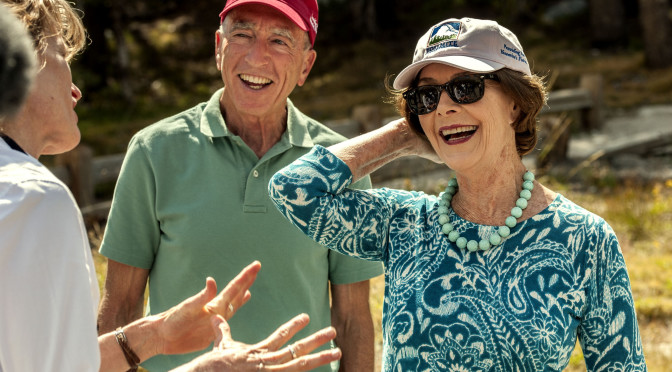 Highest road across the Sierra dedicated exactly 100 years ago

A historic rededication ceremony on the Tioga Road, conducted exactly 100 years after the original dedication ceremony, was held in Yosemite National Park, Tuesday July 28th. Former First Lady Laura Bush, Yosemite National Park Superintendent Don Neubacher, and Yosemite Conservancy Vice President Jerry Edelbrock participated in the reenactment ceremony. Highlights of the event included a rechristening of the road, a ceremonial ribbon cutting, and celebrating the history and importance of philanthropy in Yosemite and national parks across the country.

The Tioga Road, a 46-mile road in the northern portion of Yosemite National Park, is the highest road crossing the Sierra at an elevation of 9,945 feet above sea level at Tioga Pass. The road is an extremely popular route for the park’s four million visitors per year and is generally open for May through September each year. Highlights along the Tioga Road include Tuolumne Meadows, Tenaya Lake, and trails leading into the park’s spectacular backcountry.

“I’ve loved our parks for many years and hiked in parks all over the country accompanied by my friends,” stated Former First Lady Laura Bush, who is the Honorary Co-Chair for the National Park Service Centennial. “I urge all Americans to think about parks in the upcoming year and find their park. I found Yosemite,” said Mrs. Bush.

On July 28, 1915, Stephen Mather, prior to becoming the first director of the National Park Service, formally dedicated the opening of the Tioga Road. The route previously was a rutted private toll-road through the park. Mather and some friends purchased the 46-mile-long road for $15,000 and donated it to the Federal Government so it could be repaired and open to all at no cost. Standing at the crest of the Tioga Road, framed by the granite peaks of the Sierra Nevada, Mather, joined by park supporters, dedicated the road by breaking a bottle filled with Pacific Ocean water on a rock with “$15,000” painted on it, symbolizing the purchase price of the road.

“The re-dedication of Tioga Road reminds us of the importance of protecting remarkable places like Yosemite’s high country and of the need to encourage future generations to visit our parks so they are inspired to be stewards of natural lands,” said Yosemite National Park Superintendent Don Neubacher.

“Even before Congress created the National Park Service in 1916, philanthropists helped to create our stunning national parks. Their commitment remains just as deep today among individuals, families, foundations, and corporations,” said Frank Dean, President of Yosemite Conservancy. “Philanthropy has had a dramatic positive impact on our park system.”

Yosemite Conservancy donors have helped restore famous overlooks including Tunnel View, Glacier Point and Olmsted Point, which is located along Tioga Road. $20 million is being raised for the restoration of the Mariposa Grove of Giant Sequoias, which will be matched by the National Park Service. A $13.5 million effort restored 100 miles of trails, the largest trail repair program in park history. Contributions helped reintroduce Bighorn sheep and peregrine falcons and install bear-proof lockers. Another $13.5 million went to the Lower Yosemite Fall project, with more than $11 million from 14,000 contributors, setting a new world-class standard for improving iconic natural locations. More than $1 million annually goes to programs for youth of all ages to create a new generation of park stewards.