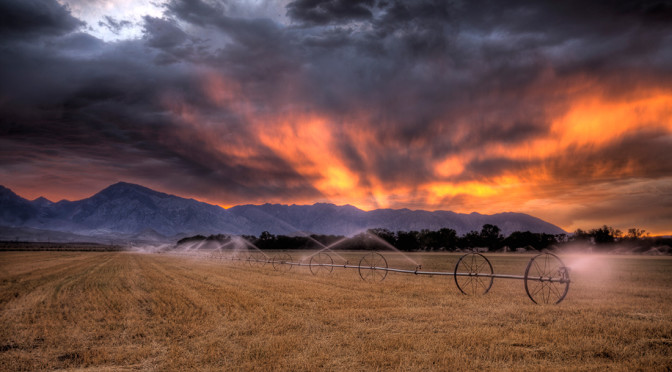 LADWP TO PROVIDE IRRIGATION WATER IN OWENS VALLEY THROUGH AUGUST

Statement provided by the LA DWP:

Bishop, CA – Unexpected summer rainfall has provided sufficient water in the Los Angeles Aqueduct system for the Los Angeles Department of Water and Power (LADWP) to continue irrigation in Owens Valley through the end of August. Continued irrigation, in the absence of any savings elsewhere, is only possible because Los Angeles’ extreme reduction in water exports from the Eastern Sierra.

“This weather could not have come at a better time,” Manager of the Los Angeles Aqueduct James Yannotta said. “These rains are providing much-needed water that will help LADWP to continue irrigation through August.”
Earlier in this extremely dry year LADWP recognized that there might be insufficient water supplies from the Los Angeles Aqueduct to meet all water demands in the Owens Valley and in the City of Los Angeles. The Long Term Water Agreement between the City of Los Angeles and Inyo County protects two end-goals: Providing a reliable source of water for Los Angeles and protecting the Owens Valley environment. The Agreement also contemplates the Parties approving a program to provide for reasonable reductions in irrigation water supply for Los Angeles-owned lands in the Owens Valley and for Enhancement and Mitigation (E/M) programs during periods of dry-year water shortages. Consequently, the Technical Group and the Standing Committee have attempted to evaluate and provide reasonable reductions in other areas to reallocate water for irrigation during the 2015 runoff year. Although the City and the County have not yet agreed to any reductions in E/M projects, the City of Los Angeles has almost entirely reduced the Owens Valley water supply to customers during this irrigation season.
The length and intensity of this four-year drought has surprised most water managers and regulators in the Southwest. The intensity of the scant Eastern Sierra snowpack and potential runoff was not fully realized until early April, which left little time to plan for its impacts, forcing the Department to evaluate operations on a virtual real-time basis. With respect to current conditions, the picture continues to be grim for Angelenos as LADWP will experience an 85% reduction from its normal export from the Eastern Sierra this runoff year.
“The only bright spot in our most recent forecasting is that it appears recent rain events provided additional water that we did not anticipate when we released our Annual Operations Plan in April,” Yannotta added. “Even though most, if not all, of the extremely low snowpack has already melted, recent storms are providing unanticipated run-off into the Eastern Sierra that will allow us to continue irrigating longer than we previously expected.”

The 2015 runoff year is unique in that snowpack was the lowest on record, measuring only 4% of normal, but summer precipitation is appearing somewhat above normal. The hydrologic conditions this year are so different from previous years that there isn’t another year from which to draw a fair comparison. As you would expect, the lack of comparable years has created operational challenges.

LADWP recently received preliminary draft runoff data and field information relating to water availability after the storms. Although Department management is verifying all information, LADWP is confident that there is sufficient water for irrigation in Owens Valley through the end of August.