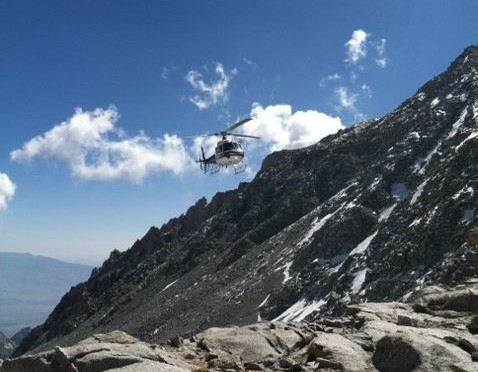 The body that was located off the Shepherd Pass trail has been identified as 37-year old man, Kenneth Pledger, from Colorado City, AZ.  According to the Inyo County Sheriffs Department, at this time the cause of death has not been determined.

Back on Monday, May 18th, 2015 Inyo County Sheriff’s Dispatch received notification of a deceased person off the Shepherd Pass trail at about the 12,000′ elevation level. The information shared with the Sheriff’s Office from the reporting party was that it was evident that the person had been deceased for some time.

Due to the demanding and steep terrain, it was determined that a helicopter recovery would be the safest mechanism to remove the body. Several attempts were made, but due to the recent storm activity in the High Sierra’s the recovery mission had to be held off until the morning of Wednesday May 27th. CHP Helicopter H-80 out of Apple Valley was utilized. Inyo SAR members were able to safely secure the remains for transport to the Lone Pine Airport where they were met by the Inyo County Coroner’s Office.