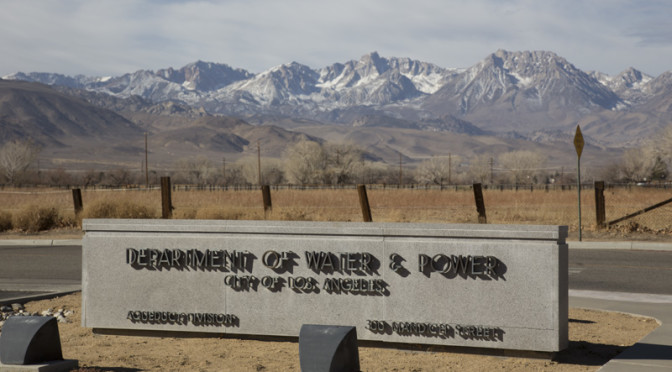 The June 4th Inyo/LA standing committee meeting was dominated by a shared sense of cooperation between Inyo County and the Los Angeles Department of Water and Power.  Working through another year of drought the two parties agreed to reduce water to the McNalley enhancement/mitigation project and Warren Lake while securing irrigation water through July.

In response to the June 4, 2015 Inyo County/Los Angeles Standing Committee meeting, The Los Angeles Department of Water and Power has issued the following statement:

“The Los Angeles Department of Water and Power (LADWP) is pleased with the outcome of the June 4 Standing Committee meeting. In these times of unprecedented drought, we are encouraged by the collaboration exercised by the Inyo County community. This shared sacrifice by all, including the City of Los Angeles who itself is receiving an 85 percent reduction in LA Aqueduct water this runoff year, will allow local ranchers the ability to irrigate their lands through July. LADWP and the other MOU parties are working toward finalizing an agreement (hopefully by early THIS week) that will save up to 4,000 AF of water toward additional irrigation in the Owens Valley. If additional water savings are realized on Owens Lake this Fall and are agreed by Great Basin, State Lands, and California Department of Fish and Wildlife, then more water can be made available for continuing irrigation into August and later into the irrigation season.  We look forward to continued constructive collaboration with the community and more positive outcomes from future negotiations.”

The next Inyo/LA standing committee meeting is set for July 24th in Los Angeles.