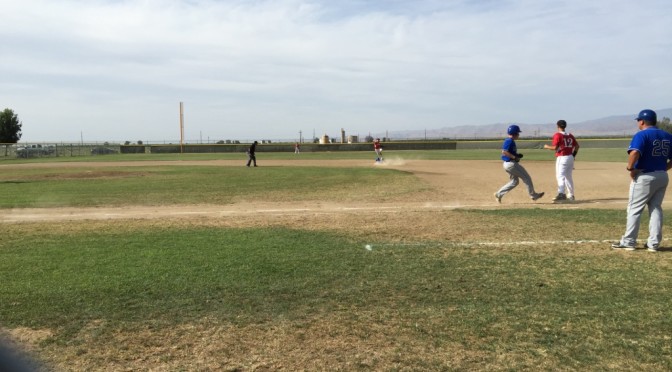 The Arvin Bears down Bishop Union 6-0

The Bishop Union high school baseball team closed out the 2015 season with a loss in the CIF central section division 5 first round.  Arvin high schools Jose Salinas threw a complete game shut out allowing just 3 hits.  The Broncos managed just three singles, one walk and one hit-batsman vs. Arvin’s Junior pitcher.  The Broncos had only one runner advance to third base, senior Alex Sipes in the seventh inning.  Salinas was matched up with Bishop Junior Aaron Chinzi.  Chinzi pitched 4 innings allowing 5 runs on 7 hits striking out 3 bears.  The Bronco defense committed three first inning errors helping the bears open up a 3-0 lead.  Arvin added a run in the 3rd inning on a RBI single by Nick Flores.  The bears added an insurance run in the 4th on a Jorge Gomez solo homerun.  Chinzi gave way to senior Justin Hollowell in the 5th inning.  Hollowell allowed a single and walked two consecutive bears to load the bases.  Justin got out of the jam with a strikeout and an inning ending 1-2-3 double play.  Hollowell induced a come-backer from Jorge Gomez, fired to home for the first out, and catcher Colton Riesen completed the double play with a perfect throw to first basemen Brodie Maloney.  Arvin did break through against Hollowell in the 6th with an RBI off the bat of Javier Moreno.

The Broncos are coached by Chris Walston, Chris Connolly, and Jeff Hollowell.