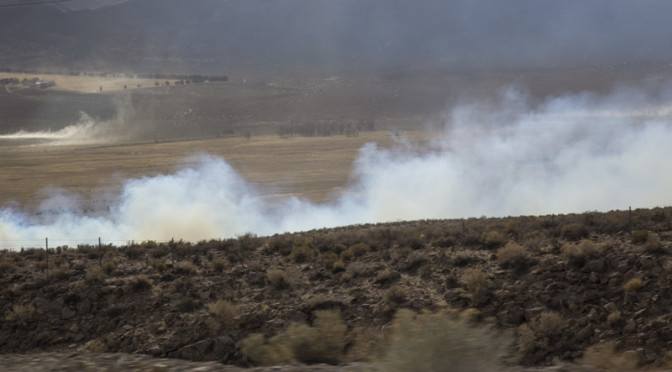 1:30 pm Saturday, February 7th, Update
Cal Fire is now confirming that 39 structures have been lost as a result of the Round Fire.  The acreage total is listed at 7,000 with two injuries reported, both to firefighters.  One firefighter was treated for smoke inhalation Friday night and one firefighter suffered a fall today during mop up.
A community meeting will be held tonight at 6pm at the Round Valley School.  Fire fighting officials will be on hand to brief the community on the fire fighting effort.

Victims who have been displaced by the fire can contact the Salvation Army.  760-872-2124.  The Salvation army can provide shelter and has access to clothing, food and other essentials.  They are also receiving tax deductible  donations to help those in need.

The preliminary count shows 20 homes have been lost in the community of Swall meadows and Paradise.  The fire broke out Friday afternoon near the Schober ranch in Round Valley, the cause of the fire remains under investigation.  High, erratic winds quickly grew the fire to over 7,000 acres.  Officials at Cal fire indicate that the total number of homes lost could climb once a better evaluation is conducted today.  “We anticipate that number to increase” says Cal fire spokesperson Liz Brown.

The tri-county fair grounds in Bishop is accepting donations for those who lost their homes in the fire. Clothing and basics will be accepted at the patio building beginning at 9:30.

Cal Fire is reporting injuries to one firefighter who suffered smoke inhalation battling the fire in swall meadows.

from cal fire…Significant rain stopped the forward rate of the fire around 2am. Downed power lines and venting propane tanks make re-entry for residents dangerous.