Bishop, CA, October 21, 2014:  The Palisade Glacier Chapter of the Daughters of the American Revolution (DAR) is partnering with the Ladies Auxiliary to the Veterans of Foreign Wars Post 8988 to host a Meet & Greet for all Inyo County Veterans and their spouses.  The event will be held on November 8th at VFW Post 8988 (484 Short Street in Bishop) at 1:00 PM.  Refreshments will be served.

The Secretary of Defense was authorized in 2008 by the National Defense Authorization Act to conduct a program to commemorate the 50th anniversary of the Vietnam War. The main objectives of this program are to: thank and honor the Veterans of the Vietnam War, including POW/MIA personnel and their families, for their service and sacrifice; to highlight the service of the Armed Forces and the contributions and support of Federal agencies and organizations; to pay tribute to contributions made on the home front; to highlight advances in technology, science, and medicine during the Vietnam War; and to recognize the contributions and sacrifices made by the allies of the United States during the Vietnam War. More information is available at www.vietnamwar50th.com .

In support of DAR’s partnership with the Department of Defense for the 50th Anniversary Vietnam War Commemoration, on Monday October, 27th at 7:00 p.m. the Bishop City Council will be presenting DAR with a Proclamation. Additionally, VFW Post 8988 will be presented with a 50th Anniversary United States of American Vietnam Commemoration Flag and a Proclamation signed by the President of the United States of America.

Additionally, the VFW will be conducting memorial services at the Pioneer Cemetery at 11:00 a.m. on November 11th  in honor of Veterans Day. The Ladies Auxiliary to VFW Post 8988 will be hosting a reception with refreshments at POST 8988 immediately following the service. 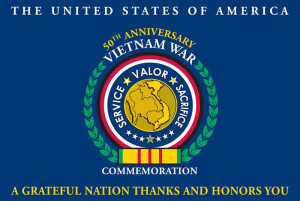